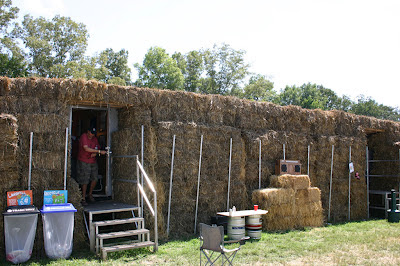 WESTLAKE VILLAGE, CA, July 2, 2012 — For the eleventh year in a row, tens of thousands of excited music fans descended upon Manchester, Tennessee, for the Bonnaroo Music and Arts festival, held June 7-10, 2012. Bonnaroo 2012 was filled with memorable moments from its dozens of performing acts, including Radiohead, Red Hot Chili Peppers, Phish, Skrillex, Dispatch, The Roots and many more. Backstage, several of the festival’s acts were asked to lay down tracks in a purpose-built recording studio, outfitted with the help of Guitar Center Professional (GC Pro), the outside sales division of Guitar Center that focuses on the needs of professional users. The recorded tracks were mixed and mastered immediately and transferred to the radio tent next door for broadcast on radio stations nationwide.

The studio, appropriately dubbed “Hay Bale Studio” after the dozens of hay bales positioned on the exterior for sound rejection, was again operated by Nashville’s The Toy Box Studio, and Toy Box’s producer/recording engineer Lij was at the helm for the sessions. The whole backstage studio/radio area was overseen by Asheville, North Carolina-based Music Allies. In the weeks leading up to the festival, the studio’s gear equipment list was compiled by Lij, his assistant engineers, and GC Pro’s Nashville-based Senior Account Manager Chad Evans, who was also on site along with other GC Pro personnel.

Among the gear supplied by GC Pro were Burl converters, Slate Pro Audio Dragon compressors and Fox Mic Pre's, an Avid HD Native system and microphones from Royer, Mojave and Shure, among other equipment. All in all, 40 of the festival’s artists recorded nearly 100 tracks in the studio, including The Alabama Shakes, Feist, Young the Giant, Umphrey's McGee, Two Door Cinema Club and many more. The schedule for each session was fast-paced, leaving room for a quick setup and soundcheck leading up to first-take recordings of three songs, before each act was guided to the interview booth, also in the “Hay Bale Studio” trailer, to make room for the next act in the tracking room. Within an hour, the performances had been mixed down to two tracks and prepped for broadcast from the radio tent next door. Approximately 45 radio stations nationwide featured these “Bonnaroo sessions” over the weekend. The multi-tracked sessions were also preserved and archived, as in past years.

“We had a fantastic session this year!” notes Lij. “40 bands and 94 songs recorded, mixed, mastered, and already aired on the radio thanks to GC Pro. We had such great support from Chad, and are eternally grateful!”

Evans stated, “This is our fourth year helping sponsor the studio at Bonnaroo. The festivals just keep getting better. We have developed a great partnership with Lij and crew, and we’re proud to contribute. We are eager for next year and beyond, because Bonnaroo is so vital for the music industry and emerging acts.”

About Guitar Center Professional/Guitar Center
Founded in 2001, Guitar Center Professional is the outside sales division of Guitar Center that focuses on the needs of professional users. Its clientele includes recording studios, audio engineers, producers, recording and touring musicians, live sound venues, post production facilities and more. Emphasizing extraordinary individualized service via local account managers, GC Pro offers expert consultation and a comprehensive selection of the world’s finest equipment for music and audio professionals. More information on GC Pro can be found by visiting www.gcpro.com.
at 11:06 AM