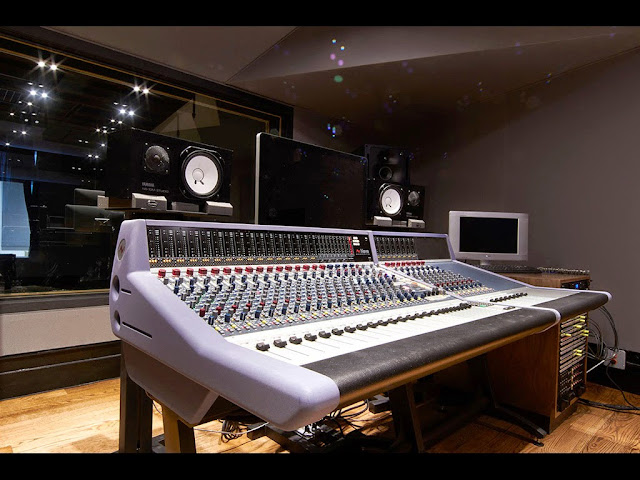 The console and engineer control center for New York City’s new Conclave Studios, with a gear setup designed by Malvicino Design Group and outfitted by GC Pro. Photo courtesy of Malvicino Design Group. © 2014.
WESTLAKE VILLAGE, CA, July 22, 2014 — New York City has lots of recording studios — the Williamsburg district of Brooklyn alone reportedly has 60 or more. But Mitch Cox hadn’t found one that catered to heavy metal and hard rock the way the aspiring record producer and entrepreneur wanted to, so he set out to build one. “When you’re designing a studio for maximum flexibility, to try to please everyone, you make design and equipment choices based on that, and those are inevitably compromises,” says Cox, “In this studio [Conclave Studios], we made design and equipment choices around the classic metal sounds.” Assisting Cox in his vision has been Guitar Center Professional (GC Pro), the outside sales division of Guitar Center that focuses on the needs of professional users. Conclave Studios came about around a meeting between Cox and Milo Pullman, a GC Pro Account Manager working out of Guitar Center’s Union Square store location. After listening to Cox’s vision for his studio and his business, Pullman suggested a meeting with Horacio Malvicino, a noted recording studio designer and a GC Pro Affiliate Program member. Within a matter of weeks, what had been Cox’s vision suddenly had a team to build it. After several months of searching, they found a former recording studio on the far edge of Manhattan’s Chelsea neighborhood, in a massive, glass-walled building overlooking the Hudson River.

Horacio Malvicino – whose Malvicino Design Group has done nearly two dozen studio designs as an Affiliate of GC Pro, including Live’s new Think Loud residential facility in York, Pennsylvania, the newly completed Seven Pillars near Abilene, Texas, and Noisematch Studios in Miami, saw Conclave Studios as a unique task – “It’s always a challenge designing a facility in a big city, where isolation and sound control are critical. Especially,” he adds, “if you’re talking about heavy metal music.” The overarching lesson that Malvicino took away from his research comes down to a single word: diffusion. Custom-made diffusors line the wall and ceiling of the 22x14-foot recording room, which also features acoustical clouds suspended from the ceiling with absorptive inserts, controlling flutter reflections between the floor and ceiling; the room also has reversible panels that have absorptive material on one side and reflective surfaces on the others, providing variable acoustics that let the room’s inherent reverb time vary between 0.7 and 0.95 seconds. (Not a huge range, says Malvicino, but enough for the type of music the room is intended for.) 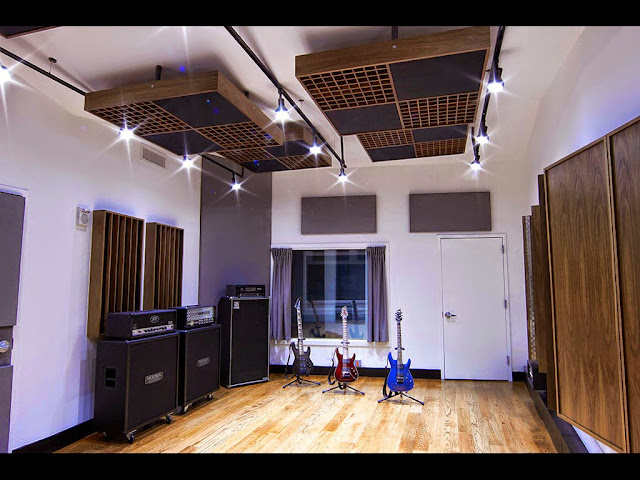 The tracking room at New York City’s new Conclave Studios, with a gear setup designed by Malvicino Design Group and outfitted by GC Pro. Photo courtesy of Malvicino Design Group. © 2014.
As Malvicino worked on the studio’s design, he also consulted with Cox, Lagudi and Pullman on what technologies to include in the studio. While there’s gear in there that any recording pro would appreciate – including Focusrite and Midas mic preamps, dbx and Empirical Labs compressors, and a microphone closet filled with names like Sennheiser, AKG, Neumann and Audio-Technica – there’s plenty of digital real estate, too, including an Avid Pro Tools HD Native system and plug-ins from Waves, Antares, Sonnox and Metric-Halo. And although they looked at vintage consoles, the team decided on something more modern for the 23x18-foot control room: a 24-channel Neve Genesys desk with 1073 pre-amps, 1084 EQs and Encore automation with Total Recall. Monitoring is handled by two Genelec 1037C Tri-amplified Monitors for mains and Yamaha NS10's for nearfields.

Cox, who is driven and was tracking within days after the facility’s completion, cites the studio’s dbx and Empirical Labs compressors, which he says give metal and hard rock drums and guitars their edge. Conclave Studios offers Cox’s interpretation of a metalhead’s dream signal chain, starting with a Peavey 6505 amp head through a Mesa Boogie 4x12 cabinet. But he’s not dogmatic about it. “We just want to become the center of metal here,” he states. “It’s not about making money; it’s about the music, so we’re here to accommodate whatever these artists need and what best suits their sound.”

Cox appreciates the input he’s gotten from Pullman and GC Pro. “They’re exceptionally knowledgeable and flexible, but what I especially like is that they stay with you,” he says. “They understand that the process of building a studio from the ground up is a long-term relationship and requires patience. If someone’s just trying to sell you a product, that’s not going to work. So much of this was working through all the details and nuances of the design. That’s what Milo and Horacio did.” 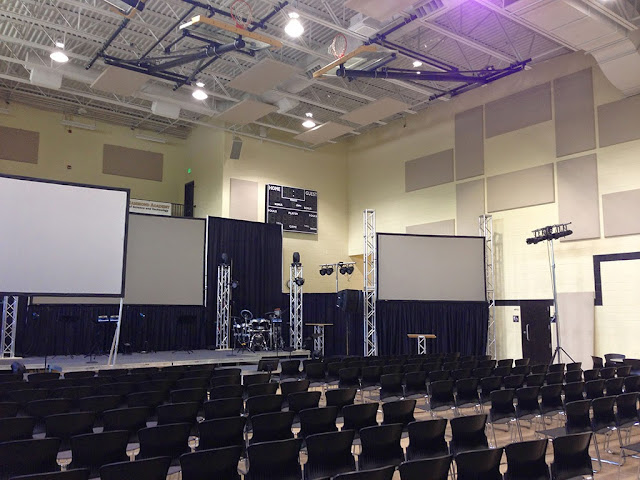 The new Faith Church location in Hammond, Indiana, featuring acoustical treatment and other gear sourced through GC Pro. Photo by Ryan Nigh, GC Pro. © 2014
— NW Indiana’s multi-site Faith Church was moving to a new location on a tight deadline, and GC Pro helped the church convert a reverberant rented gym into a highly intelligible worship space —
WESTLAKE VILLAGE, CA, July 15, 2014 — Faith Church was originally founded in 1963 in South Holland, Illinois, and like many growing churches these days, its expansions have taken the form of additional “satellite” locations instead of ever-larger main church buildings. They moved to Dyer, Indiana, in 2002 and launched their first satellite location in September 2007 in Cedar Lake, Indiana. A second satellite launched in the spring of 2009 in Valparaiso, Indiana, and two years later on Easter 2011, they opened a campus in Hammond, Indiana; in September 2012, Faith Church crossed over the state line to launch its campus in Beecher, Illinois. Most recently, the church changed locations in Hammond, moving from its original rental space there to a larger one at the Hammond Academy of Science and Technology, where they have contracted to use the school’s gymnasium on Sundays for services. “We have six locations now, and while four of them are in buildings that we own, in two of them we have a rental model, which we find works well at a time when construction costs are rising,” explains Bryan Ford, Faith Church’s Technical Operations Manager. “It gives us a lot more flexibility as we grow.”

Like most gyms, the Hammond Academy’s acoustics are highly reverberant, the opposite of the kind of extremely intelligible environment needed for worship services. Faith Church turned to Guitar Center Professional (GC Pro), the outside sales division of Guitar Center that focuses on the needs of professional users, for a solution. GC Pro brought in Accutronics LLC, a regional acoustical consultancy and A/V installer, which along with GC Pro Account Manager Ryan Nigh evaluated the location’s acoustical needs. GC Pro then specified, and Accutronics designed the layout for and installed, nearly 100 Auralex ELITE ProPanel and Cloud ProPanel acoustical panels on the 120 X 80-foot gym’s walls and ceiling.

“It worked out perfectly, and the entire process was transparent to the client,” says Mike Love, Owner of Accutronics. “We looked at the building, Ryan drew up a proposal and sent it to Auralex, which sent us back a list of the right product materials and placement patterns to use for this specific project, and we installed them without hassle.”

Of a total of 95 Auralex acoustical panels, Accutronics installed 40 of them on the gym’s ceiling to reduce flutter echoes and the rest on the walls to absorb reflected sound. As a result, the gym’s reverb time dropped from eight seconds to 1.3 seconds. “That’s a huge reduction in reverb time,” says Love. “And that‘s the kind of result you get when you work with an organization like GC Pro. In this case, the client got an accurate assessment of their situation, an expert solution design, exactly the right products to address the problem and expert installation. Only a company like GC Pro can provide that kind of comprehensive service.”

Faith Church’s Bryan Ford could not agree more: “The difference in the sound is enormous — it’s dramatically improved. They were able handle the entire project from start to finish, and they were also able to meet a very tight deadline and get us into our new church on time. When we opened three weeks ago, we got comments on how good the sound was. We have a lot of music, so we needed to control the sound as much as possible. That’s exactly what happened, so we’re glad we picked GC Pro.” 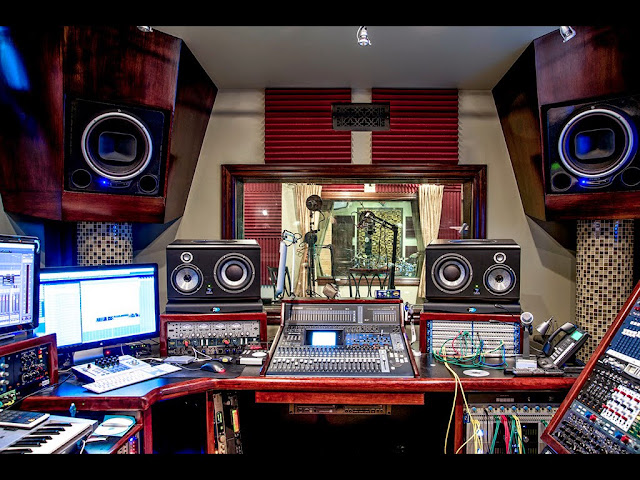 The control room of Yaniv’s Studio, the new facility run by Yaniv Farber in Southern California and outfitted by equipment sourced through GC Pro. Photo courtesy of Yaniv Farber © 2014.
— Farber is translating his success in the tile and stone business in Southern California into an expanded professional recording studio enterprise, and GC Pro is there to outfit the new facility from start to finish —
WESTLAKE VILLAGE, CA, July 9, 2014 — For over 20 years, Yaniv Farber’s main business has been Sandy Ceramic, Inc., a high-end tile, granite and marble installer in Southern California. But aside from that, Farber's passion has been music, which he had recorded and edited on small home studio platforms. This year, he decided to make a big move; in a renovated building on his property he created the elegant facility Yaniv’s Studio. And it was outfitted from top to bottom with equipment sourced through Guitar Center Professional (GC Pro), the outside sales division of Guitar Center that focuses on the needs of professional users. 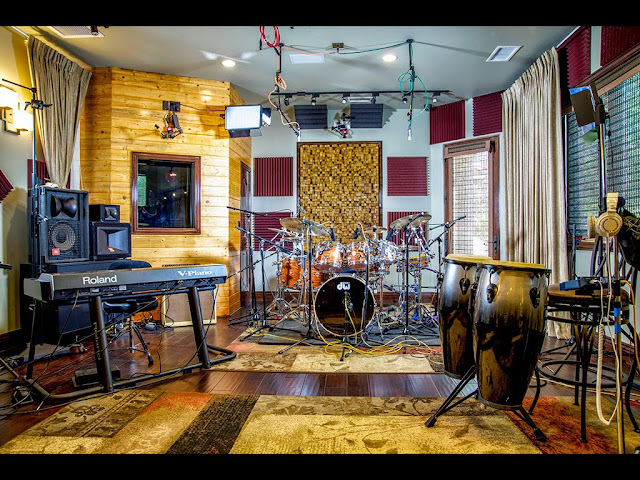 The live/tracking room of Yaniv’s Studio, the new facility run by Yaniv Farber in Southern California and outfitted by equipment sourced through GC Pro. Photo courtesy of Yaniv Farber © 2014.
“I decided to go for it,” Farber says, simply and earnestly. “I’m trying to make a business of it.” He has a lot of personal resources: in addition to his experience as a musician, engineer, editor and producer, his time in the construction business included working on other studios as they were being built, which gave him knowledge and insights for his own studio design, which includes a vocal booth and several iso booths. “It’s designed for my work but also to be available for other artists, engineers and producers to work in,” he says. “Most importantly, we can do live sessions here. It’s a great-sounding room to record in.”

What’s also great, Farber adds, was working with GC Pro. “Ziv Gross at GC Pro, he’s my man!” he exclaims, noting that the GC Pro Account Manager helped him choose gear, tweak his acoustical design and assemble some of the systems. “Then there’s the technical support, which is always there. Working with GC Pro has been a great experience.”