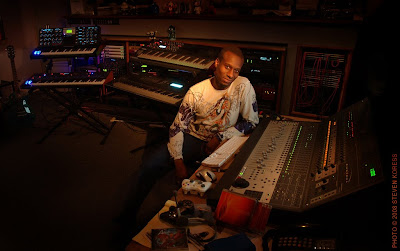 Vince Lawrence, founder and CEO of Slang Musicgroup, which recently benefited from software upgrades with the help of GC Pro.

WESTLAKE VILLAGE, CA, December 1, 2011 — Vince Lawrence has packed more into three decades in the music business than some achieve in a lifetime, initially as an artist, entrepreneur and innovator who helped introduce house music worldwide, then as a composer, producer and remixer who has come to effortlessly straddle the worlds of music and brand marketing. Lawrence’s Slang Musicgroup recently turned to Guitar Center Professional (GC Pro), the outside sales division of Guitar Center that focuses on the needs of professional users, as they were upgrading the company’s production studio. Chicago-based Dan Scalpone, GC Pro Regional Manager, South Central U.S., was Lawrence’s primary contact on the project.

A studio owner for many years, Lawrence, founder and CEO of Slang Musicgroup and a Chicago resident since birth, has amassed an extensive collection of recording hardware and instruments, but with so much now being produced in the box, the facility’s main computer needed an upgrade. “We wanted to take advantage of some more horsepower in other programs that we were using outside of Pro Tools,” he says. “Since we were making the upgrade we said, what else could we do at the same time, since we were going to take some time off? So we also took the opportunity to isolate some of the noisier equipment.”

Scalpone, another longtime resident of Chicago, spearheaded the project for GC Pro. “I gave Vince all the options, and we sat down with the Avid product specialist and had some good meetings and demonstrations to narrow down what he needed. He wanted to update his Apple OS to Leopard, and naturally he had to upgrade Pro Tools, and he wanted to upgrade his computer. He bought a 12-core Mac and a bunch of hard drives with a Magma chassis. He also got some extra RAM, plus the additional cards for Pro Tools.” 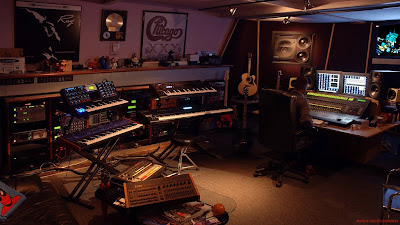 The control room at Slang Musicgroup, which recently benefited from software upgrades with the help of GC Pro.

Having access to the fastest computer available and 30 GB of RAM is critical for a studio that runs so many software instruments, not to mention the various applications, such as Logic and Reason, preferred by the team’s composers, according to Lawrence. “We got Vienna Ensemble to use as a bridge so that we could load the other synths into different RAM or even different computers that are elsewhere on our network, so we could maximize our composition palette. We wanted to have as many different things running virtually as possible,” he explains.

In addition to the upgrade to Pro Tools 9, and shortly to Pro Tools 10, new software at the studio also includes Native Instruments Komplete & Maschine, Spectrasonics’ Omnisphere and Arturia’s collection of VST instruments. “Plus a few other interesting synth goodies that I’ll keep to myself for the moment,” laughs Lawrence. With the installation of Apple’s Leopard OS, he upgraded the studio’s Waves plug-ins (Mercury bundle) and added the Abbey Road Studios bundle. The processing plug-in collection was further expanded with iZotope’s Stutter Edit, Elysia’s mpressor and the SPL Tube Vitalizer. The upgrade included a single item of outboard processing hardware, an API 2500 stereo compressor.

With producers and musicians all working in the facility’s large control room, noise was an issue, so Lawrence also purchased a 20-unit IsoBox rack from Sound Construction. “Lowering the noise floor while keeping critical gear in the room was one of his objectives,” reports Scalpone.
Slang Music Group is also working with several artists on Atlantic Records, says Lawrence. Somehow the team has also found time to create a five-CD set of loops and one-shot samples, Chicago Fire, for Sony Creative Software’s Acid application. “It’s a good basic toolkit for anybody who wants to make good sounding house music and electro,” he says.

There is no denying that Slang Music Group is busy: “Our posted hours are 9 a.m. to 3 a.m. Not that I’m here for all of them,” Lawrence acknowledges, “but we’re willing to book a session between those hours. We really want to help out as much as we can, so there’s a pile of stuff going on around here.”