Mark Isham Turns to GC Pro to Outfit His Studio 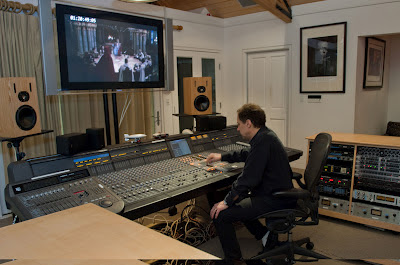 Composer Mark Isham, pictured in his home workspace, outfitted with the help of GC Pro.

— As he creates scores for programs like ABC’s Once Upon a Time, Isham looks to
GC Pro for products, service and support —

WESTLAKE VILLAGE, CA, July 12, 2012 — Award-winning composer Mark Isham has an impressive list of credits: scores for such films as Crash, A River Runs Through It, The Black Dahlia, Blade and dozens more, as well as TV shows such as Chicago Hope; a number of GRAMMY®-winning solo albums; and a number of other highly regarded collaborative projects. Recently, his focus has been on composing the music for the hit ABC television series Once Upon a Time, a unique recasting of fairy tale conventions in a semi-modern setting. As he composes at his home studio for this project and others, he again and again turns to Guitar Center Professional (GC Pro), the outside sales division of Guitar Center that focuses on the needs of professional users, to source gear and provide ongoing service and support.

“I have had a long relationship with GC Pro,” Isham says. “A lot of my equipment has come through there. The GC Pro branch in Hollywood has been our go-to shop for years. I love working with them, because if I want to try something out, they just get it to us. They have a great department there.”

The home workspace of composer Mark Isham, outfitted with the help of GC Pro.

For each episode of Once Upon a Time, Isham composes in Apple Logic, adapting his established character themes and creating new ones when necessary, and records in Avid Pro Tools. A demo then gets sent to his producer and the show’s creators, who send their comments. Once the material has been approved, the show goes into production, and an orchestrator generates the full scores from Isham’s themes.

As one might expect, the layout and components of Isham’s main writing room have been fine-tuned over the years to be perfectly conducive to creativity and productivity. A Logic/Pro Tools setup faces one wall, and a mixing console faces the opposite wall. He has multiple sets of monitors for a TV-type setup as well as a fuller theater setting. The mixing room features an Avid-Euphonix console, accompanied by a 10-way speaker system with Class A amps. He uses M-Audio digital audio and MIDI solutions, plug-ins from Universal Audio and Tannoy monitors, among other gear.

Southern California-based GC Pro Account Manager Bill Learned has been one of Isham’s main contacts. He states, “Mark is a pleasure to work with. As an artist, musician and composer he stands apart from the herd. He continues to push himself to explore new territory musically and in doing so stays on the cusp of what modern day recording has to offer. We are proud that he chooses to rely on GC Pro for his various needs.”